Champion vs. Honda Generator Battle: Which Brand is BEST? – Yorator

Many people debate between Champion and Honda when buying a generator. These brands are the most popular on the market, and they both provide fantastic quality. Choosing between a Champion vs. Honda Generator can be tricky, but there are a few factors to consider when making your choice.

Both manufacturers have their pros and cons. For example, Honda generators are very durable and quiet. Champion, on the other hand, builds more affordable units. Thus, the choice depends on what you need and your available budget to invest in a generator. 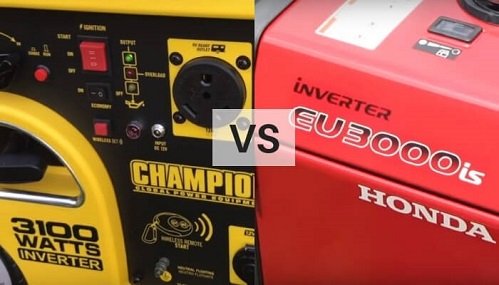 To make it easier for you to choose, we put some of the most popular Champion vs Honda generators head to head. Now, let’s dive into the details and see what sets them apart. 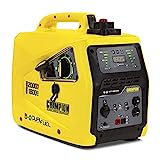 Although these two generators are similar, there are still some significant differences. First, let’s mention that under a quarter of load, the Honda unit produces only 48 dB of noise, which is impressively quiet. Champion produces 53 dB, which is also acceptable, but louder by comparison.

The other difference between these units relates to the electricity these generators can produce. Don’t forget that the 100402 is dual fuel, so we should compare both options. Ultimately, while Honda produces 2200 peak watts, the Champion generator produces 2000 watts on gasoline and 1600 watts on propane. Rated watts are the same (1800W) for both generators on gasoline, but on propane, Champion produces around 1450 watts.

Another difference is related to their displacement. While the Honda generator comes with the 121cc engine, its competitor uses an 80cc engine. That being said, although Honda has a bigger engine, it also has a significant advantage. For example, it has an 8-hour runtime on a quarter of load due to its larger engine. On the other hand, with a quarter of load, Champion can run for around 11 hours on gasoline and 24 on propane. Ultimately, the propane generator definitely makes a difference.

When it comes to other features, these Honda and Champion models are very similar. They weigh almost the same and have similar dimensions. They also have similar outlets and come with the same 3-years warranty. Ultimately, you’ll want to choose between both based on how each would meet your specific needs.

As you can notice, the Honda unit is quieter and provides a bit more power. However, the Champion 100402 can use both gasoline and propane and has a much better run time. Also, Champion is more affordable, which is another advantage.

When talking about generators with more strength, these two should definitely be mentioned. Both generators offer enough power for various home appliances and provide fantastic quality.

To start, let’s mention that both units are quiet portable generators. While Honda produces between 50 dB and 60 dB of noise, Champion almost never goes below 58. For reference, the noise level of 58 dB is slightly higher than normal conversation, which makes these ideal for camping without too much disruption.

Now, let’s talk a bit about power. The Honda unit provides starting power at 3000 watts and continuous power of 2800 watts. The Champion model, however, is a bit more powerful. It has a power output of 3400 watts starting and 3100 watts running and can run up to 8 hours on gasoline. On the other hand, thanks to Eco-throttle, the Honda generator can run up to between 7 and 20 hours, depending on the full load.

The Honda generator also comes with a useful advanced inverter technology which makes it ideal for any sensitive device, such as digital cameras or laptops. Ultimately, the Honda generator and inverter provides a stable, clean current that is as reliable as the current you get from the outlets in your home.

There is no huge difference between the Honda EU-3000is and Champion 100263. You can’t make mistakes with either one, so ultimately consider your priorities to pick the best for you. 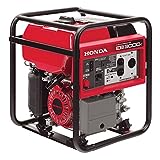 The main difference between these two generators is the electricity output. While the  Honda generator produces around 3000 starting Watts, the Champion generator has an output of an amazing 4750 watts! Also, Champion has a bigger,224cc engine, compared to Honda’s engine of 196cc capacity.

Both generators are powerful and provide a similar noise level. No matter the load, none of these generators will produce a noise above 70 dB.

Another advantage of Champion Power Equipment is its portability. Although the Honda unit weighs only 70 pounds, the Champion generator has two rubber wheels, which is very useful for transportation. On the other hand, the Honda unit is slightly smaller and is easier to carry around.

A nice feature of the Honda EB-3000c is that it comes with CycloConverter technology. The unit features a CPU that conditions the power, eliminating the need for a big, robust alternator. Without the alternator, the generator is able to reduce both weight and size.

Overall, both generators are EPA-approved and CARB-compliant, which means that you can use them in any state, including California.

Among all the generators in their price range, the Honda EB-3000c and Champion 76533 are definitely the best. To compare the two, the Champion option offers better power, while Honda offers a more reliable current for sensitive devices.

As you can see, both Champion and Honda generators don’t differ by quality. In fact, they are both fantastic portable generators. However, you can use differences in power output, noise level, and portability to compare different generators from both manufacturers. To make your final decision, be sure to keep these features in mind and consider what you really need.